Email open rates improved again this year, thanks to consumers’ ever-growing use of mobile devices to manage their inboxes. Yet key benchmarks such as click rate and transaction rate continue to decline. As it gets harder to cut through the inbox clutter, email marketers increasingly seek new ways to upgrade the relevancy of their communications, according to a new eMarketer report, “Email Benchmarks 2014: Richer Data, Mobile Optimization Crucial for Greater Relevancy.”

The majority of marketers opt to send emails during the week, but marketers switching their send day to Saturday could see higher open rates and average order sizes.

Thursdays saw the highest volume of US email sends in January 2014, according to marketing analytics and competitive intelligence firm TrackMaven. Tuesdays and Wednesdays were equally busy, while both Saturday and Sunday saw the lightest volume.

But Q4 2013 data from Experian Marketing Services suggests that perhaps when faced with fewer emails, consumers may be more likely to engage and shop. The marketing services firm found Saturday had the highest open rates and average order sizes compared with all other days. Sunday had the highest click rate and revenue per email averages, but the lowest order amount.

Time of day definitely plays a role in affecting key email marketing measures, but there is no one silver-bullet time for improving benchmarks across the board. In fact, findings suggest that oftentimes, key measures such as unique open rate and average order size are at odds. 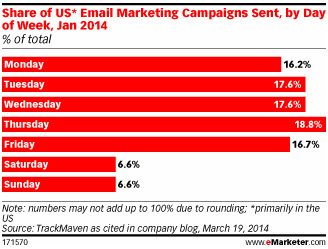 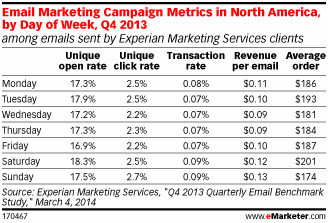 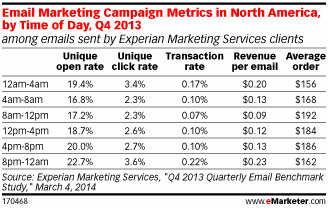 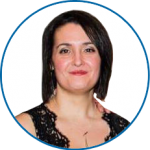 Get more details on when is the best time to send emaisl and avoid the trash can  by getting in touch with her right now! She will be able to assist you in the deployment of your email marketing campaign.