Emails sent between 8pm and midnight get best results

In everyday life, most people don’t want to be bothered late at night. But the opposite seems to be true when it comes to email. According to a Q4 2012 analysis by Experian CheetahMail of its North American clients’ email campaigns, emails sent late at night outperformed emails sent any other time of day.

Experian found that emails sent between 8pm and 12am generated higher open and clickthrough rates, more transactions, larger orders, and greater revenue per email than emails sent during any other time of day—and by a significant margin.

As email marketers pay close attention to the times when their campaigns get the best ROI, they also must begin factoring in the device on which consumers are opening their messages. Smartphones and tablets are playing an increasing role in consumers’ off hours, and many of these emails will see clicks from mobile devices. 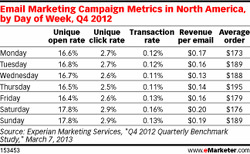 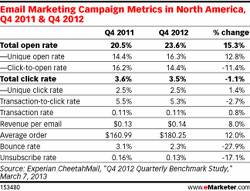 Get more details on why emails sent between 8pm and midnight get best results by getting in touch with her right now! She will be able to assist you in the deployment of your email marketing campaign.