Too many is too much

Email marketing—a mainstay for grabbing customers’ attention—only works when it is not abused. Research shows that internet users are most likely to unsubscribe from email lists because they get too many emails in general.

When MarketingSherpa asked US adult internet users why they unsubscribe from email lists, one in four said they did so because they receive too many emails—the most common reason among respondents in the October 2016 survey.

Users were also likely to unsubscribe if a specific company sent too many emails. About one in five internet users said too many would spur them to quit.

For marketers wondering how often is “too often,” an August 2016 survey from Mapp Digital found that 40% of US internet users said receiving marketing emails once a week was preferable. This was more than twice the number of respondents who felt receiving emails monthly was about right—the second most popular choice.

When recipients unsubscribe, it’s time to clean up a list’s quality, advised eMarketer analyst Jillian Ryan. “Email list fatigue occurs when consumers unsubscribe to mailings because they feel overwhelmed by marketing emails,” she said. “This impacts performance and deliverability over time, as it diminishes audience size and causes lower engagement. Maintaining a high level of list health and subscriber quality, as well as including relevant, personalized messaging, can combat some of these concerns.” 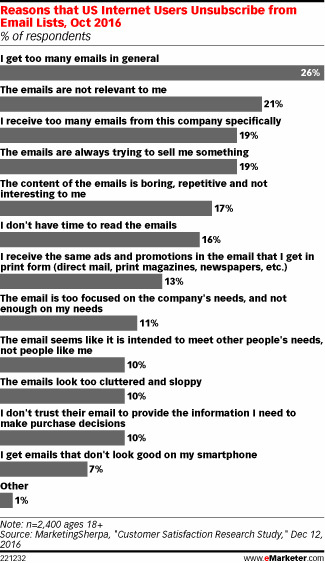 Get more details on why consumers get email fatigue by getting in touch with her right now! She will be able to assist you in the deployment of your email marketing campaign.