They prefer to give information directly to the companies they buy services from or the brands they purchase. Enjoy recent weeks hot topic about Facebook scandal to activate your marketing actions to fill your databases!

According to a recent Vision Critical survey of digital buyers in North America, 80.1% of respondents said they would be comfortable sharing personal information directly with a brand for the purposes of personalizing marketing messages just like in an email marketing campaign. But just 16.7% said they would be OK with sharing this type of information through third parties.

The utilization of third-party data has become a hot topic in recent weeks due to Facebook’s ongoing scandal with Cambridge Analytica, in which information was harvested without people’s permission for voter targeting purposes.

The growing skepticism toward data collection was reflected in a Gallup survey of 785 Facebook users in April 2018, in which 43% of respondents said they were very concerned about invasion of privacy.

Facebook also recently announced it was shutting down its Partner Categories, which enables third-party data providers to offer their targeting directly on the platform. “The ads world and the data world are just crashing into the real world right now,” said Mark Rabkin, Facebook’s vice president of ads and business platform. 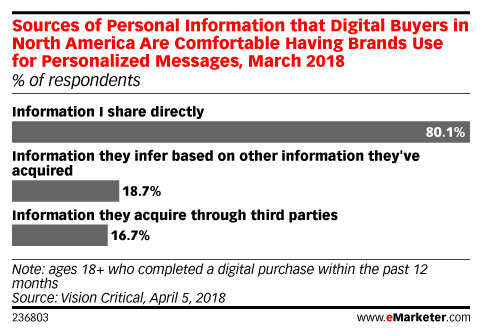 Another topic that’s making users question how their data is being used by advertisers is the Canadian Anti-Spam Legislation (CASL) and the EU’s General Data Protection Regulation (GDPR), which goes into effect in May 2018. These laws states that people’s data can only be used if they give a company explicit permission like sending an email. It is causing much consternation within the marketing tech space, and it is pressuring companies that rely on third-party data. In short, nothing better than building a strong customer database that relies on the consent of recipients.

Of course, advertisers can be proactive in soothing users’ fears. Among those polled by Vision Critical, 43.8% said they would be more comfortable giving their personal data to companies if they could easily see all the personal information that companies store about them.

Get more details on why  your customers prefer to give you their personal informationmail marketing is the most-used channel among B2Bs and also the most-measured by getting in touch with her right now! He will be able to offer you customized solutions to your business needs.