YEAR IN AND YEAR OUT, EMAIL MARKETING REMAINS A DEPENDABLE TACTIC FOR RETAILLERS !

Along with search, it continues to make up a significant portion of digital budgets. Growing mobile usage and the ability to better personalize messaging are creating new possibilities for reaching consumers more effectively. But, as we explore in the new eMarketer report, “Retail Email Marketing: Benchmarks and Trends in the US,” any improvements are likely to be gradual, not revolutionary.

Email plays a prominent role in digital budgets—its share is second only to search. According to Forrester Research figures released in July 2015, email accounts for 14% of the total digital budget in the US. A similar figure (17%) was cited by retail executives surveyed in March 2015 by eTail. In that study, email appeared to punch above its weight. While search accounted for 43% of marketing spend but only 38% of revenue, email’s 17% of spend led to 24% of revenue.

In July 2015, Netta Kivilis, head of marketing at the predictive marketing platform Custora, reported that on average, 15% of its retail clients’ ecommerce transactions were attributed to email marketing. “It’s one of the biggest channels, and we know that for some of our customers, email is their top channel, driving as much as 40% of their overall revenue.”

Rumors that young people have abandoned email notwithstanding, most US internet users, young and old, do interact with email marketing. A December 2014 Listrak survey found that overall, 72% of respondents ages 18 and older opened and read promotional retail emails. When breaking down the results further by age and gender, the most likely group to perform this behavior was women ages 35 to 44 (78%), followed by millennial males ages 18 to 34 (76%). 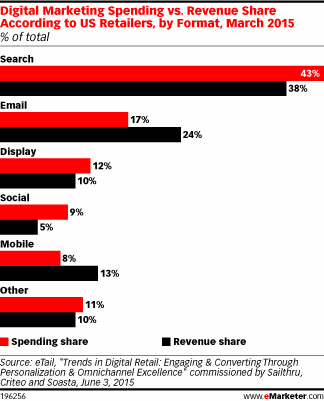 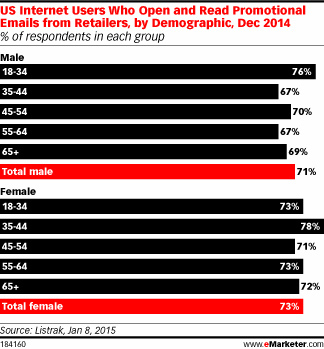 Get more details on why retail email marketing is changing, but gradually by getting in touch with her right now! She will be able to assist you in the deployment of your email marketing campaign.