Nearly one in three emails sent in North America during Q1 2013 were opened—the highest number in recent history. Mobile device adoption and the use of marketing automation to send more targeted emails are having among the biggest impacts on email performance, according to a new eMarketer report, “Email Benchmarks: Key Metrics and Trends for 2013.”

A February 2013 survey from enterprise email service provider BlueHornet showed that 71.8% of US email users ages 24 to 40 said they typically read their personal email throughout the day. Mobile plays an undeniable role in enabling consumers to check email from anywhere and at any time of day.

Data from marketing software provider Knotice showed mobile phones and tablets accounted for a combined total of 41.1% of US email opens in H2 2012, up from 27.4% in H2 2011.

Some marketers and email solution providers have recorded even higher open rate shares. Pam McAtee, Epsilon’s senior vice president of digital solutions, said mobile now accounts for 60% or more of all opens for most clients. She expects that percentage will continue to climb before plateauing at around 70% to 80%.

“We’re tracking consumers opening [emails] multiple times on multiple different types of devices,” McAtee said. “We can see that they opened an email on a mobile device and then on a desktop, predominantly in that order. They’re using mobile devices to sift through their email and clean up their email, and then they’re going back to a desktop and converting.”

To drive greater engagement with email, whether on desktop or mobile, companies are using marketing automation via triggered messaging. Triggered emails enable marketers to use automation to respond to a user-prompted action or behavior. Consumers opened one out of every two triggered emails in North America in Q1 2013, according to Epsilon. 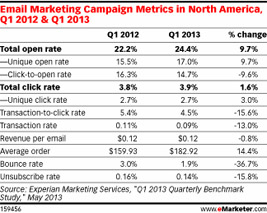 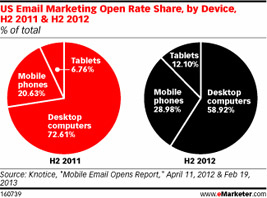 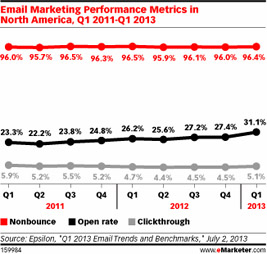 Get more details on how mobile and targeting drive up email opensell-timed emails can affect a variety of brand goals by getting in touch with her right now! She will be able to assist you in the deployment of your email marketing campaign.