Desktops still dominate as device of choice for reading emails

While it may be easy to dismiss email as a stodgy marketing channel, it’s impossible to dispute the results it yields. Simply put, email pairs low cost with a level of effectiveness hard matched by other channels.

A December 2012 survey of US internet users conducted by email marketing software company Campaigner found that presenting users with a name they were already acquainted with proved to be a particularly effective way to drive open rates. Almost one-quarter of respondents said the No. 1 influence on whether they would open a promotional email was the familiarity of the sender’s name. Just over 15% said they were most influenced by the email subject line, while nearly 10% said the device on which they were reading the email had the greatest effect on whether they would open the missive. Knowing that the email contained a deal or promotion seemed to have the least effect on open rates.

Data from email marketing service provider BlueHornet found that familiar names had a similar effect on open rates. In their February 2013 survey of internet users in the US, they found that almost seven in 10 said they were likely to open emails from brands whose products they often purchased either online or in brick-and-mortar stores.

Mobile has added a further wrinkle for email marketers. It’s unclear whether email opened on mobile devices drives purchases. Campaigner found that only 6.1% of respondents had actually bought something on their smartphone or tablet after reading a promotional email.

BlueHornet, meanwhile, reported that 63.2% of respondents said they were either extremely or somewhat likely to make a purchase after reading a promotional email on a mobile device. That gap might be explained by a substantial difference in consumer intent and consumer practice. While mobile users might think themselves predisposed to easily making purchases on their devices, it seems they show some hesitation in pulling the trigger. 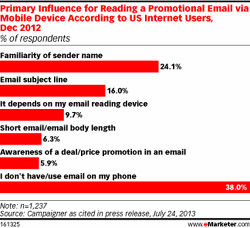 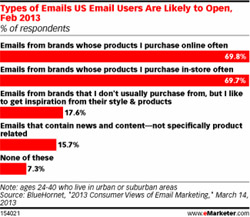 Get more details on why name recognition drives opens for emails by getting in touch with her right now! She will be able to assist you in the deployment of your email marketing campaign.