Most opens occur on mobile, and orders are trending that way

US email marketers are having increasing success with mobile devices compared to the desktop. According to August research, mobile devices were driving more email clicks, orders and revenues in Q2 2016 than a year earlier.

In August, Yesmail reported results from about 7 billion emails sent by its clients within various industries, though largely retail-focused, during Q2 2016.

Compared to a year earlier, mobile’s role was more prominent across several metrics. Mobile devices—including tablets—accounted for more clicks, more order and more revenues in Q2 2016 than they had a year earlier. The biggest gain in terms of share of the total was in orders, which tilted 9 percentage points further toward mobile this year.

Most notably, while desktops still account for most orders and revenues, mobile did outperform desktop in terms of clicks at 52.8% to 47.2%.

In February 2016, Movable Ink broke out email benchmarks for smartphones, tablets and the desktop. In Q4 2015, more than half of opens came from smartphones. But these devices accounted for only 20% of conversions.

Meanwhile, an outright majority of conversions still happened via desktop, despite only 31% of opens happening there.

Smartphone conversion rates generally are increasing, helping drive most increases in retail mcommerce sales in the US, eMarketer estimates. 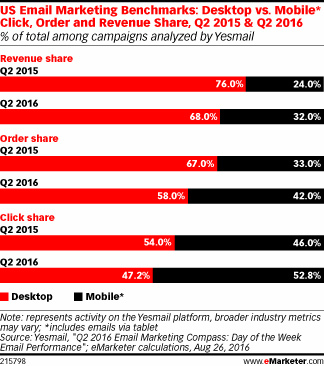 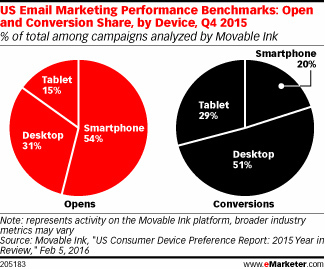 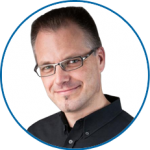 Get more details on why email continues to get more mobile by getting in touch with him right now! You will be able to benefit from email marketing and develop email strategies that actually works !